For more than a decade, the Bethony Laboratory has supported multiple vaccine projects and initiatives focusing on the epidemiology and immunology of both pre-clinical and clinical vaccine candidates. Here we develop immunological, cellular, and serological assays (both rodent and human) to support and evaluate candidate antigens, formulations, and adjuvants (in particular, potency assessment) and also support the needs of clinical (Phase 1) trials in a quality regulated environment (GLP).

We have been an active member of the Sabin Product Development Partnership (PDP) and the novel, low-cost, effective HOOKworm VACcine to Control Human Hookworm Infection in endemic countries (HOOKVAC) program together with the Sabin Vaccine Institute. In addition, we partner with other vaccine development programs and area partners in their research to support product development in both a collaborative and quality environment.

Hookworm is considered one of the more important parasitic infections of humans with approximately 600 million people infected. The largest numbers of hookworm cases are in sub-Saharan Africa, Southeast Asia, and tropical regions of Brazil and the Americas; with three quarters of the world’s hookworm infections caused by N. americanus. The clinical hallmark of hookworm infection is iron deficiency anemia (IDA) that results from losses in intestinal blood from adult parasites feeding blood at their site of attachment in the gut. For example, in humans, 25 adult N. americanus hookworms will cause 1 ml of blood loss containing 0.5 mg of iron per day, or roughly the daily iron required by a child. Several epidemiologic studies confirm hookworm’s substantial contribution to the global burden of IDA, which results in 841,000 deaths and 35 million Disability-Adjusted Life Years (DALY) lost annually. Additionally, this impact is felt most among school-age children (impaired development and cognition), and among both pregnant and non-pregnant women.

The current approach to hookworm control relies on mass drug administration with a single dose of either albendazole or mebendazole. However, high rates of mebendazole drug failure with only a 15% cure rate, along with diminishing efficacy of mebendazole with repeated use have led to international calls to develop a hookworm vaccine. Effective vaccines administered as a preventable biologic or following benzimidazole treatment (vaccine-linked chemotherapy) could prevent deaths and avert DALY.

Schistosomiasis is a neglected tropical disease that affects more than 200 million people worldwide and is associated with more than 200,000 deaths and the loss of up to 56 million DALY annually. Chronic infection with Schistosoma mansoni can cause anemia, delays in physical and cognitive development, liver fibrosis and death. Current control efforts consisting of annual or semi-annual mass drug administration with praziquantel are inadequate and additional tools are needed.

Until recently, schistosomes have successfully eluded development of an efficacious vaccine due to their complex immuno-evasive strategies on their tegument (host-parasite interface). A vaccine is currently being tested by the Sabin Vaccine Institute to prevent disease due to S. mansoni and consists of a 9.1-kDa recombinant protein expressed in Pichia pastoris. Sm-TSP-2 is a critical component of the adult schistosome tegument as evidenced by RNAi experiments and vaccination of mice with recombinant Sm-TSP-2 resulted in significantly lower parasite numbers following challenge. Additionally, this protein is recognized by putatively resistant individuals living in endemic areas that are chronically exposed to S. mansoni but remain uninfected.

We support the conduct of Phase 1 clinical trials in humans of two human hookworm vaccines considered Investigational New Drugs (FDA-IND). The Bethony Laboratory developed and maintains assays to measure the immunogenicity and functionality of these candidates during the course of clinical trials and maintains compliance under Good Laboratory Practices (GLP) in support of these studies. Additional resources include our in-house biostatistician, small animal facilities, as well as contract Quality Assurance (QA) oversight.

Dr. Jeff Bethony supports a variety of clinical trial facilities in both the United States and Brazil with Dr. David Diemert.

The Bethony Laboratory currently supports a multitude of neglected tropical disease vaccine candidates in a pre-clinical capacity. In this capacity, we provide immunological analysis of pre-clinical studies to support the testing and regulatory development of vaccines including the bivalent Human Hookworm Vaccine with the Sabin Vaccine Institute. The potency assay is just one such assay that is developed in the Bethony Laboratory. 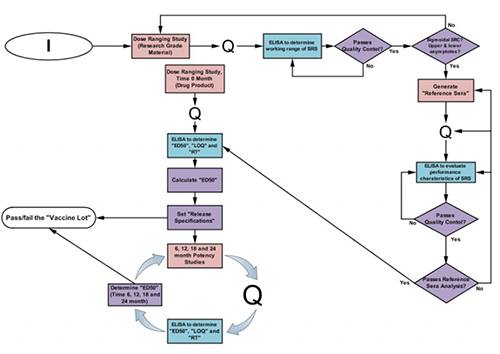 We develop bioassays to compare the immunogenicity of recombinant malaria vaccine candidates and formulations through potency assay development. This provides valuable feedback to program sponsors and development partners. In addition, these assays provide further outputs for down-selection of candidates as well as a reproducible, reliable, and robust assay to monitor the stability and production consistency of such candidates.